OSC staff were excited to attend the 10th Marine Alliance for Science and Technology for Scotland (MASTS) Annual Science Meeting, which was held online between 5–9 October. MASTS 2020 was centred around major innovations in the field of marine sciences that have characterised and shaped the past decade. Themes discussed during the five-day conference covered a range of topics from general science, e.g. species distribution in Scottish waters and impacts of climate change, to more specific issues such as governance of Scottish seas, understanding of marine stressors and their role in marine ecosystems, development of innovative technologies and methodologies for data collection and analysis, innovation in aquaculture research, and investigation of the role anthropogenic structures play in the marine environment.

OSC scientists presented in the ‘Structures in the Marine Environment’ session. OSC presented extensive findings on marine fauna (invertebrates, fish, and megafauna) that were discovered to be associated with offshore infrastructure. Research was conducted on opportunistically obtained Remotely Operated Vehicle (ROV) footage. The talk given by OSC staff can be found on OSC’s YouTube channel, and the papers cited can be found on our ‘Publications and Press Covers’ webpage (Todd et al., 2020a; Todd et al., 2020b; Todd et al., 2020c). 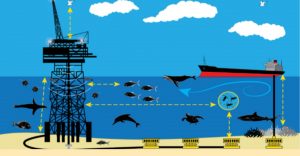 OSC is pleased to announce the release of a new peer-reviewed scientific article, ‘Influence of offshore oil and gas structures on seascape ecological connectivity’, published