OSC is pleased to announce publication of the article Predictive capacity of Ecopath with Ecosim: model performance and ecological indicators’ response to imprecision (Susini and Todd, 2021) published in the scientific peer-reviewed journal Environmental Modelling & Software. This article was led by one of OSC’s members of staff and co-authored by OSC’s Managing Director, Dr Victoria Todd.

The ecosystem modelling complex ‘Ecopath with Ecosim’ (EwE) has been implemented extensively in the fields of marine science; however, despite its widespread application and increasingly critical role in policy advising, descriptions of its functionality and limitations remain limited in the literature. Usefulness of any model is contingent on the reliability and accuracy of its output. Yet, as all models represent imperfect abstractions of reality, and precise input data are seldom obtainable, the entirety of output values are de facto subject to imprecision. This is particularly true of multispecies modelling approaches like EwE. As complexity of such models is augmented to reflect biological realism, a concurrent increase in scientific uncertainty due to scarce knowledge of functional relationships is unavoidable.

Using eight existing models obtained from the online EwE model database EcoBase, Susini and Todd (2021) conducted a multi-factorial evaluation of the predictive capacity of the EwE modelling complex, focusing on simulated predictions generated by the static mass-balance Ecopath component. We executed a formal simulation testing to address two principal questions concerning implementation of Ecopath models: (i) the extent to which the model is responsive to errors in particular input variables, and (ii) the extent to which the subjective process of model balancing originating from an identical initial dataset (a practice simulated herein through the Monte Carlo routine) may cause predictions to diverge from their original values. Our analyses focused on the capacity of Ecopath to predict precisely both stock Biomass (B), an indicator of ecosystem resource potential, and Ecotrophic Efficiency (EE), an indicator of anthropogenic pressure describing the fraction of species production accounted for as predation and fishing mortality. Lastly, we investigated influence of data input imprecision on four ecosystem metrics belonging to three separate categories of ecosystem-level indicators: (i) Kempton’s Q index, a biodiversity indicator, (ii) predatory biomass and (iii) mean Trophic Level of the community (mTLco), both describing ecosystem structure and functioning, and (iv) Total System Throughput (TST), describing ecosystem stability and resistance.

Overall, this study demonstrates that Kempton’s Q index and TST are the most consistently responsive of the six investigated output parameters, irrespective of model, perturbed input parameter, and degree of alteration. Under the 61 investigated uncertainty scenarios, both metrics exhibited a rather constant behaviour, such behavioural predictability contributing to modellers’ ability to anticipate likely prediction errors when confidence in the quality of input data is deficient. Moreover, we identified an uneven distribution of leverage amongst input parameters, with biomass constituting the most consistently influential overall. Propagation of imprecision from input biomass to biomass-based outputs suggests a potential inadequacy of the mass-balance constraint of EwE in averting inaccurate predictions. The study encourages further research aimed at subjecting the model to a thorough Global Sensitivity Analysis (GSA) that accounts for the unique characteristics of the software, and the development of a built-in tool to conduct Sensitivity Analysis (SA) within EwE itself.

As summer is in full swing, and COVID-19 restrictions are relaxing, there is a pressing issue on most beach goer’s minds: why is there so

We are very excited to announce that we are collaborating with Opticron. This means that we can offer discounts to participants of our Marine Mammal 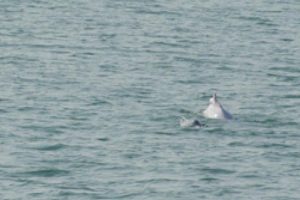 LIFE AS AN MMO IN SE-ASIA: Part II

On completion of the 14-day quarantine I was collected by a company driver and taken to my new base of operations, a sleepy fishing village